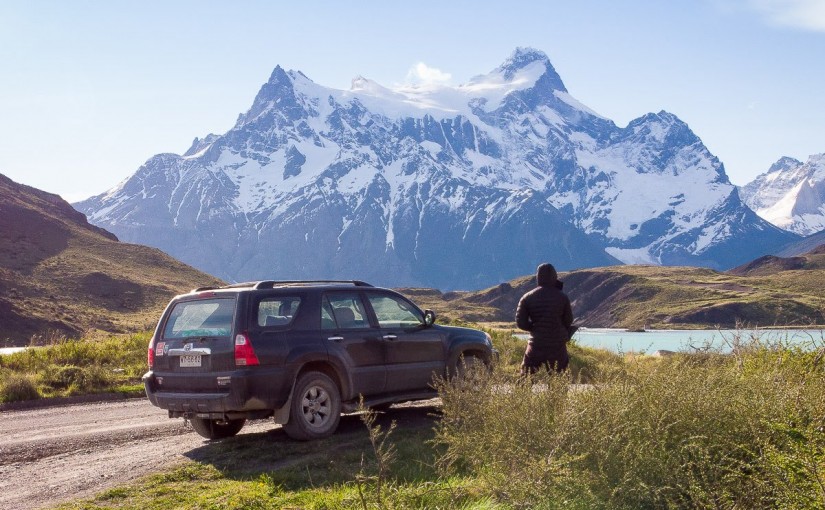 I had a hard time trying to find the costs of traveling through SA so to make it easier for you, here is what I did and the costs I ended up with.

The Plan
I had a limited time (5 months) and wanted to have more freedom so I decided to buy a car instead of the traditional route: hike/bus/hostel/camp or rental. South America is HUGE so I hoped to go in one direction only (south) but realized that I may have a hard time buying the car in one country and selling it in another so I started in Santiago de Chile and made a round trip up to Bolivia, Peru (lower half) and then down through Argentina route 40 all the way to Ushuaia. Then back through Chile to Santiago.

The Car
From my research, Chile was the best place to buy and sell a car. It was correct. Two weeks or so before my arrival I found a car online at drivetheamericas
ended up buying it with slight delay due to the paperwork. Then i was able to sell it on the same site again to a great couple that is doing a similar journey. You will find tips on buying a car elsewhere so i will not go into it. Just will say that as risky and potentially costly it was, it turned out to be real time and cost saver.

The Trip
It was a nice adventure, a bit of an adjustment from sailing though 🙂 I came during the winter and it took me a while to figure out how to stay warm. Showers in the car are difficult. Space in the car is limited. On the other hand, unlike at sea, the internet is almost everywhere and so are the people. So even when I messed up, somebody always helped me. Once I adjusted, about a month in, I was fine and after 2 months I even preferred to sleep in the car. I ended up getting hotel/airbnb only like once a week just to mix it up a bit. aaand of course before and after I sold the car.
From Santiago I drove up through Argentina first because I have been told Peru is more strict about car paperwork. It was correct, I was able to get to Argentina and Bolivia with just a signed letter from the seller. Finally, when i got to Peru, they gave me a hard time but the paperwork made it through the system (took them a month) so ultimately they let me through.
I didn’t need 4×4. I didn’t need 2 spare tires. I hardly used the camping thangs, just the sleeping bags. I did get a theft insurance though and its probably going to pay off because the last week I got my phone and cards and cash stolen right from my hand in Santiago. I am not gonna cry about it. I expected something to happen and am glad it happened when I was already set and stationary before flying out.

The Breakdown
Soo, the money! As before, ‘how much does it cost to sail around the world‘, I split the money into several categories. The total I spent was about $10k in 5 months, so about $2k a month, an average of $67 per day. It split up to the following:

Food: $3k – mainly because I ate out most of the time. I cooked only a few times in Peru and in Torres Del Paine while camping. I don’t eat in fancy restaurants but I do eat often 🙂 so this cost may be lower for you if you solo travel and about the same if you are a couple :))

Gas: $2.7K – I did somewhere around 20K kilometers so its not that bad. Here are a few tips, Chile is expensive, Argentina/Peru are decent, and Bolivia is super cheap BUT you will have to negotiate the price in Bolivia. Yup, the thing is that they have two prices, one for locals, other for tourists, but they don’t have a good system to track the tourists so gas attendants keep the difference. Took me a few weeks before i realized it.

Non-Food: $4.2K – this is everything else including theft insurance that I got for the car and my personal items. That alone was about $1.5k. Ferry ride from Puerto Natales to Puerto Montt was $800. I didn’t look through the spending in detail but guess housing would be next, then entries to parks and misc.

Here you can find all the details broken down daily. If there is a bigger spend I comment on it.

Best of luck fellow travelers!
follow my adventures or connect with me on IG @dkremsa

PS: A funny story about the main photo 🙂 I took it with my drone in Torres del Paine. It was very windy so I was being careful not to fly it far. When I was bringing it in a huge gust picked up and blew the drone over a kilometer out behind a mountain and disconnected. I almost got a heart-attack, drove out, searched for it for like an hour trying to get to a dot that the controller was giving me. When i was close, the dot moved, then moved again. It was very stressful, i pretty much gave up and then TADAAAA all of a sudden, i found it, with its propellers half beaten but in tact and good for more adventures. YAY! 🙂