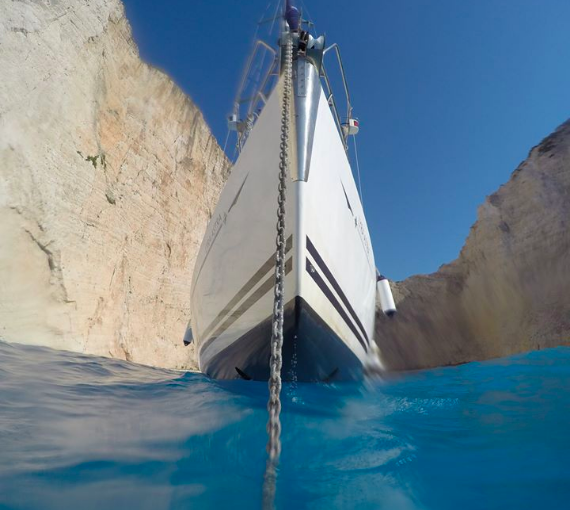 This is a very spur of the moment post. After number of wonderful months I ran into a couple rough patches, I could have prevented some of the bad things but didn’t. That got me thinking, why is it that when something bad happens other bad things pile on? I do have a conclusion but first two stories.

Three weeks ago, when crossing from Turks to Bahamas I planned to take a rest and tucked behind one of the small islands. The wind was picking up and I already had over 30 hours of solo sail behind me. I dropped my anchor and was about to turn the engine off when I see the chain rolling out. Faak, I realized caught onto something, ran forward, tightened the winch-less and started to pull the chain up. After only about 5 meters the boat jerked, the chain yanked back out. It was definitely trapped under a rock. I brought out a rope to secure the chain from rolling out and was going to nudge it section at a time. Long story short. After about half an hour of fighting it, completely destroying my anchor roller and scratching side of my boat I decided to drop the anchor with all the chain and move on. I sailed right into the storm with high winds. Reefed the sails and went into the cabin to make it through. After three to four hours the rain and wind subsided and I started making head way again. My boat was full of water, I lost a yellow flag that i tried to put on and had another 30 hours of sailing ahead of me to a nearest marina.

Two weeks later, I was in a sxsw conference. If anybody went there, you know its massive, a week of non-stop learning and sharing. While in the middle of it all, I noticed that bitcoin was starting to loose value. I am a strong believe in bitcoin and had a bunch. I didn’t think about it much but when it continued the next day I researched it. The issue was core issue in bitcoin system. I decided to sell portion of them but didn’t want to lose much so i waited. I waited too long and it started declining sharply, i sold it. Then it bounced back and i though, well, maybe i messed up and bought some back but then it started dropping again and I freaked out and sold it again. I did this over and over loosing a lot of money.

Here I am, still with a dull headache, thinking. Why did I handle a life threatening situation so well and financial situation so badly? I think it’s a compilation of reasons but they can be grouped into these two:
1. Majority of our decisions are emotional.
2. The more we are out of our comfort zone the more we base our decisions on external inputs.

A great SXSW session by Christopher Graves supports this theory. He says 90% of our decisions are emotional.

He even provided ways on how to change opinions of others:
– use narrative transportation works when crafted well, non threatening
– detach user from opinion affirmation (disentangling) makes it less threatening
– put a graph or a number on what you want to prove
– build empathy for a character: reading about stupid makes you stupid. Says this is due to Mirror neurons – experience by watching!
– use concrete terms vs abstract: concrete can be drawn. More concrete = more believable
– show social norms (social proof): we don’t want to stick out
– Worldview & cultural cognition: We each have different underlaying importance (Individualism/communitarian + hierarchical/egalitarian)

Looking outside in. I see that I am constantly swayed by combination of all of these. When fighting to survive I was well grounded plus there was nobody around to generate doubt. This made my decisions very sound and resulted in minimal damage. However, when making my financial decisions I got out of my comfort zone and started to seek validation from the outside which really wasn’t good, generated a lot of mixed actions and ultimately caused me a lot of money.

The takeaway, gage how balanced you are when making important decisions. Gage how much are your decisions effected by methods of people around you. Willingly or not, they effect your decisions.